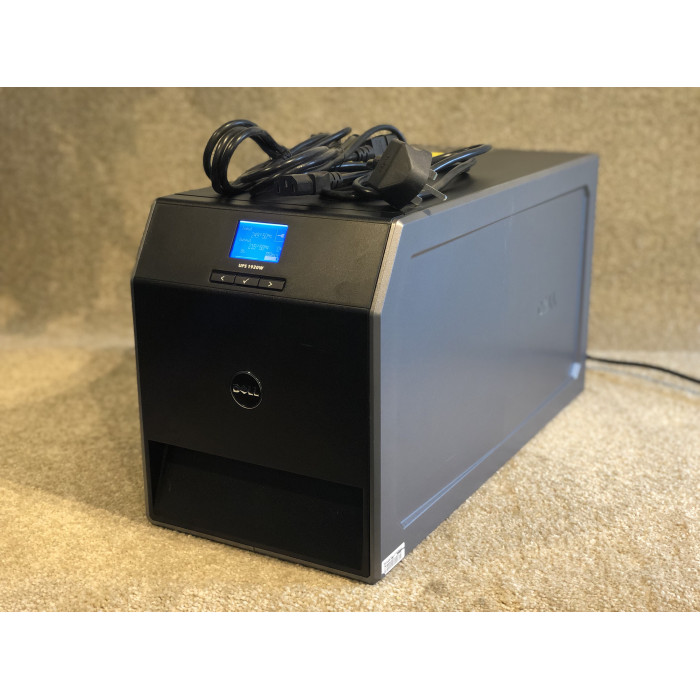 This UPS has a raft of features, from the advanced battery management, quiet fan, LCD control panel and many output receptacles. These are in two groups, that can be controlled (turned on or off) independantly, very handy. There is also a USB cable to connect to your computer for signalling purposes, and with my windows 7 machiene, it auto detects and works with native drivers (no downloads needed).

There is a neat illuminated on/off button on the rear of the UPS.

Optional network cards (Dell H910 class, ask us if we have any in stock if interested) via the port on the rear of the UPS.

Legend of the dell fan. The dell tower range all have fans. They are normal enough in our warehouse, but once you get it into an office it is noticeable, and too noisy if you have a quiet space. We had a customer who was replacing the same unit, and thought there was a difference because of the new unit fan being noisy. I checked the manual (you can get it from the downloads section) and on page it gives info that the fan can be off/low/high depending on load. Now we had never seen this and always thought the fan just runs at a single speed. The customer and I had just about given up when, after almost a week, the UPS fan stopped. Subsequently customers have confirmed this behaviour, which I can sum up as, if you have a low load, in a normal temperature room, and the cells are fully charged, after 5 days or more the UPS turns its fans off.

Report from our customer:

You’re right, I hadn’t even realised but the fans aren’t actually spinning at all. Just took off the front panel to check and both the front and back fans aren’t spinning. Its currently 22c in my office and the corner the UPS is in is probably even slightly hotter as its tucked in a cubby with a small server and switch.

Reported an 8-9% load consistently since 6am this morning (says 130w on screen right now).

I’ve not heard the fan at all but I’ve only been at my desk for 1.5hrs. If it comes on today I’ll let you know but this time of year my office only gets colder throughout the day as I heat it first thing with the house radiators."

No customer reviews for the moment.

30 other products in the same category: